“There are children shouting outside and I want to set them on fire.”

“I think about killing a lot/and some of you are usually the targets of my daydreams.”

Caption underneath photo of long sword: “I want it. Imagine me cutting off the heads of those in the IDF with this.”

“Oh/And, tomorrow is (hopefully) the day that I find out if I will be the President of the General Union of Palestine at my school/…Hopefully I’ll be able to radicalize half of our population and bring them back with me as fighters.”

On the Jewish student group, Hillel: “I hope they all trip down the stairs and break their necks.”

Speaking of the State Department-designated terrorist group, Popular Front for the Liberation of Palestine (PFLP): “I’ve stayed at the home of a branch commander and had dinner with his family. I’ve also participated in marches and gone to lunch with armed fighters. Guess that makes me a huge terrorist and you should be afraid, because I know where you live.”

In light of school shootings and other murderous violence on college campuses in California and throughout the country, AMCHA Initiative is deeply troubled by these postings and worried about the continued safety and well-being of students at SFSU, especially Jewish students.

AMCHA Initiative began monitoring GUPS, in November, after the organization hosted an all-day celebration commemorating the 6th anniversary of the Edward Said mural where students could use stencils to make signs that said, “MY HEROES HAVE ALWAYS KILLED COLONIZERS,” a reference to the killing of Jews. SFSU President Wong made a public statement condemning the GUPS’s stencils glorifying violence after AMCHA Initiative informed him about the matter. 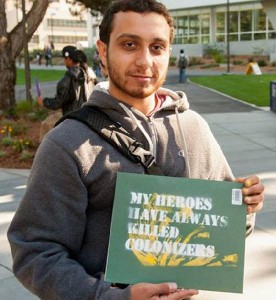 In December, AMCHA discovered a Hammad posting, underneath a picture of himself brandishing a large knife, that read: “I seriously can not get over how much I love this blade. It is the sharpest thing I own and cuts through everything like butter and just holding it makes me want to stab an Israeli soldier.”

Upon discovery of further postings, AMCHA Initiative turned over all postings to President Wong in mid-January. Since then, there has been no response from President Wong or SFSU.

In the dozens of postings, Hammad expresses violence toward children, SFSU Jewish students, IDF soldiers, Israelis and all who support the state of Israel. He also threatens one of his professors and glorifies the State Department-designated terrorist organization PFLP. The PFLP is responsible for 159 documented terrorist attacks.

AMCHA Initiative is troubled by the affinity of Mohammad Hammad towards this deadly terrorist organization, and concerned that the terrorist ideology espoused by the GUPS President is embraced by other members of the student organization – as evidenced by their selection of Hammad as their leader and the glorification of violence displayed in the stencils at the November 7th event.

You may see a complete list of Hammad’s postings HERE. Note that Hammad has changed his Tumblr account name numerous times, but these screenshots are all, undeniably, Mohammad Hammad.

Thank you for your continued support of The AMCHA Initiative.