University Administrators to Blame for Tsunami of Campus Antisemitism

UNIVERSITY ADMINISTRATORS TO BLAME FOR TSUNAMI OF CAMPUS ANTISEMITISM

AMCHA Initiative co-founder Tammi Rossman-Benjamin has written the following article describing the surge in antisemitism on North American campuses and the discriminatory double standard applied to Jewish students by university administrators. Sadly, University of Michigan and NYU are the latest in a growing list of antisemitic incidents where university administrators play blind, deaf and dumb.

Tammi’s op-ed was recently published by The Jewish News Service (JNS.org) and discussed in The Jewish Press. 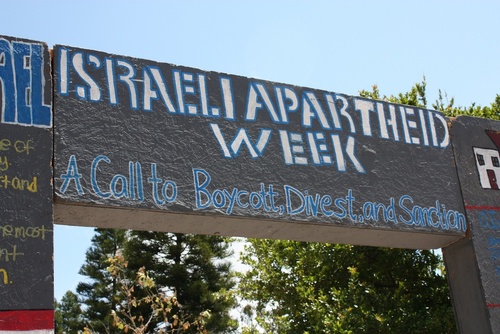 Caption: “Israeli Apartheid Week” in May 2010 on the University of California, Irvine campus. Credit: AMCHA Initiative.

As soon as an African American student at San Jose State University who was racially harassed and bullied by his dormitory roommates came forward, university, county, and state officials began an investigation. Within days, prosecutors labeled it a hate crime, battery charges were filed against three of the roommates, and the university had suspended them. Within weeks, California State Assembly Speaker John Perez announced the creation of a Select Committee on Campus Climate, and its first task was to look into this incident and find a way to prevent others like it.

When a white male threw a beer at Trinity College sophomore Juan Hernandez and yelled, “Get off our campus,” Trinity launched an investigation and charges were brought against the perpetrator. When anti-gay remarks were written on message boards that hang on dorm-room doors, Elizabethtown College began an investigation, engaged the FBI, and disciplinary action was taken.

Compare that to the situation for Jewish students. Over the last several years, Jewish students on campuses across the country have been physically, emotionally, and intellectually harassed, intimidated, threatened, and bullied, not only by their fellow students but also by some of their professors.

Anti-Israel student activists at the University of Michigan last month hurled death threats at Jewish student council members and called them “dirty Jew” and “kike.” At University of California, Berkeley, a Jewish girl holding an “Israel Wants Peace” sign was ramrodded with a shopping cart by the head of Students for Justice in Palestine. At Harvard University, the Palestine Security Committee frightened Jewish students by placing mock eviction notices on their dormitory rooms. At Northeastern University in Boston, Students for Justice in Palestine vandalized a menorah and disrupted Jewish events. At San Francisco State University this past fall, the General Union of Palestine Students hosted an all-day event where participants could make posters and t-shirts that said, “My Heroes Have Always Killed Colonizers,” meaning Jews. And just last week, at New York University, pro-Palestinian students slipped “eviction notices” under the doors of 2,000 undergrads, scaring Jewish students and parents.

The first major source for anti-Jewish sentiment on campus is members of the Muslim and pro-Palestinian student organizations. For more than a decade, these groups have sponsored speakers, films, exhibits, and guerrilla theater that engage in discourse or use imagery and language considered anti-Semitic by the U.S. State Department. These student groups have also been responsible for aggressively confronting students at pro-Israel events and threatening, physically harassing, and assaulting Jewish students.

Over the past couple of years, the groups have also promoted campaigns to boycott Israel or companies that do business with Israel. These campaigns are accompanied by talks, rallies, and exhibits containing anti-Semitic imagery, rhetoric, and actions. Jewish students have reported fearing for their safety in the days leading up to and after the campaigns, saying they were “continuously intimidated” and “repeatedly threatened.”

The second source of anti-Israel sentiment on campus is faculty. In classrooms and at departmentally sponsored events, faculty members have advanced lies and distortions about Zionism, Israel, and Jews, and advocated the elimination of the Jewish State. Although their rhetoric is unscholarly, politically motivated, and even at times anti-Semitic, these professors have wrapped themselves in the mantle of academic freedom, making it very difficult to challenge.

For four years, David Klein, a mathematics professor at California State University, Northridge, has been using his university’s server to promote his Web pages calling for the economic, academic, and cultural boycott of Israel. His Web pages contain a litany of false and inflammatory statements and photographs intended to incite hatred and promote political activism against the Jewish State.

David Lloyd is a professor of English at University of California, Riverside. In January, he organized an event on his campus that featured Omar Barghouti, the founder and most vocal advocate for the campaign to boycott Israel. Barghouti accused Israeli soldiers of “hunting children,” saying that soldiers “entice children like mice into a trap and murder them for sport.” He also accused “Israel and its well-oiled lobby groups” of “buying and paying for the allegiance of Congress” and controlling the media. Course credit was dangled to students in eight courses for attending Barghouti’s hate speech.

At NYU, Prof. Lisa Duggan hosted a conference for students that constituted nothing more than a platform for 21 anti-Israel activists to spew their hatred of the Jewish state and promote a boycott intended to hasten its elimination. Fully aware of its unscholarly, anti-Semitic, politically motivated purpose, Duggan wrote on Facebook, “PLEASE DO NOT post or circulate the flyer. We are trying to avoid press, protestors and public attention.”

The impact of this academic Israel-bashing on students has been enormous. Students have reported feeling emotionally and intellectually harassed and intimidated by their professors, to the point that they are reluctant or afraid to express a view that is not anti-Israel in their classes. They are often afraid to come forward and confront the professor or complain to the university for fear of retaliation.

Sadly, Jewish students who have spoken out have been vilified and attacked for even trying to call attention to the anti-Semitic behavior they are experiencing. For example, at a University of California, Davis anti-Israel “occupation” rally last November, a student who expressed concern about the anti-Semitic banners displayed at the protest was physically assaulted by a protestor who screamed in his face, “You are racist and you should die in hell.”