QUICK SUMMARY: An antisemitic course is being offered at UCR, which appears to violate a UC policy prohibiting political indoctrination in the classroom.  The course, “Palestine & Israel: Settler-Colonialism and Apartheid,” is being taught by an undergraduate who is head of the UCR Students for Justice in Palestine (SJP) and was a leader in the anti-Israel divestment campaign last year. The faculty mentor for the course is also the advisor for the SJP group, and himself a leader in the BDS movement.

Last Thursday, an AMCHA-led coalition of 20 groups wrote to Chancellor Wilcox explaining that the course syllabus’ extreme anti-Israel bias and antisemitic content strongly suggested that the student instructor would be engaged in politically indoctrinating her students, in clear violation of the Regents Policy on Course Content, which states: “Misuse of the classroom by, for example, allowing it to be used for political indoctrination… constitutes misuse of the University as an institution.”

For more information, please see the JNS article below.

We need your voice and action!

TAKE ACTION: Contact Chancellor Wilcox via phone and/or email (please Cc: President Napolitano and Bcc: AMCHA Initiative – see below). Express your feelings about the class syllabus, and ask Chancellor Wilcox to shut down the course if he finds it in violation of UC policy prohibiting political indoctrination in the classroom.

To read more about this egregious, antisemitic course, we recommend you read the following JNS article: 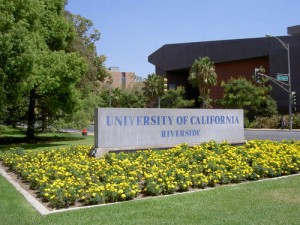 Caption: An entrance to the campus of University of California, Riverside. Credit: Amerique via Wikimedia Commons.

There has been no shortage of anti-Semitic incidents on college campuses during the past academic year, especially within the 10-school University of California (UC) system. As Jewish students deal with Holocaust imagery and student governments taking issue with their Judaism, UC Riverside (UCR) is offering a class cited by 20 watchdog and advocacy organizations as meeting the U.S. State Department’s definition of anti-Semitism.

“The course schedule is filled with egregiously one-sided, anti-Israel readings and films that falsely paint Israel as a settler-colonial and apartheid state, hold Israel to a double standard to which no other democratic country is held, vilify and demonize Israel and Israel’s supporters, and argue for an end to the Jewish state; these tropes are all considered anti-Semitic according to the U.S. State Department’s definition of anti-Semitism,” wrote the 20 organizations in a letter to UCR Chancellor Kim Wilcox.

“Anti-Semitism on California’s campuses is escalating rapidly and those of us who care about the safety of Jewish students are gravely alarmed….”