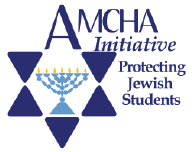 SJP member leads chants of “Intifada, Intifada, We Support the Intifada,” calling for a campaign of terror against Israelis, at an SJP rally at UC Berkeley on 10/14/15

We recently posted a new resource on our website, “Campuses with SJP Chapters,” which identifies chapters of Students for Justice in Palestine (SJP) on more than 200 college and university campuses across the country. SJP and other anti-Zionist student groups are a major source of antisemitic rhetoric and behavior at many schools. (See our recently unveiled Antisemitism Tracker for examples of antisemitic acts perpetrated by SJP members on dozens of campuses). AMCHA’s research indicates a clear correlation between the presence of an SJP group on a particular campus and actions which directly harm or threaten Jewish students, including physical and verbal assault, destruction of property, harassment, discrimination and suppression of speech.

AMCHA CO-FOUNDER TO SPEAK
AT CONFERENCE ON COMBATTING BDS

As part of our efforts to educate about campus antisemitism, we are proud to announce that AMCHA co-founder Tammi Rossman-Benjamin will be speaking at the upcoming StandWithUs International Anti-BDS Conference in Los Angeles, April 9-11. If you are able to attend, we highly recommend it! Details on how to attend can be found HERE.

Have you witnessed, experienced or read about recent campus antisemitic activity? Email us at monitor@amchainitiative.org
See the full database