AMCHA IN NEWSWEEK ON INCIVILITY VS. INTOLERANCE

AMCHA IN NEWSWEEK ON
INCIVILITY VS. INTOLERANCE

SHARE this article with your family, friends & fellow activists!
[addtoany] 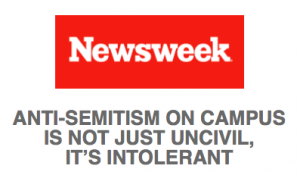 “Events like these are not welcome on our campus anymore.” — Head of Students for Justice in Palestine (SJP) at University of California Davis addressing a group of more than 70 activists preparing to disrupt a Jewish student event about Israel.

Intolerance: “An unwillingness to accept views, beliefs, or behavior that differ from one’s own”

When Jewish students who attempt to express their opposition to anti-Israel boycott resolutions are viciously mocked, vilified and heckled during student government meetings at schools such as Vassar College, Ohio University, UC Santa Barbara and University of Illinois, is it “incivility” or “intolerance”? 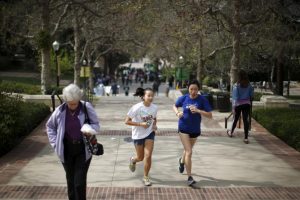 When Jewish students are shunned from participating in student government, rejected from progressive social justice activities such as pro-choice rallies, anti-rape demonstrations, Black Lives Matter events and racial justice conferences and ostracized from areas of campus life because of their “Jewish agenda” or presumed support for Israel at schools such as Stanford University, San Diego State University, UCLA, UC Santa Cruz, Northwestern University, Brooklyn College and SUNY Albany—is it “incivility” or “intolerance”?
University leaders who respond to these incidents—and the majority do not—have generally chosen to identify the problem as one of incivility, and attempted to address it by calling on members of the campus community to foster “civil” behavior and discourse.

For example, after anti-Zionist student protesters at San Francisco State University disrupted a Hillel-sponsored talk from the mayor of Jerusalem by loudly chanting, “Get the hell off our campus!” “Long live the intifada!” and “From the river to the sea, Palestine will be free!” for one hour, SFSU President Les Wong issued a statement in which he bemoaned “the state of civil discourse on our campus” and called for “a supportive and collegial environment in which disagreements can occur thoughtfully and respectfully.”

After members of an anti-Zionist student group disrupted a Brooklyn College faculty meeting by chanting slogans such as, “Zionists off campus,” CUNY Chancellor James Milliken announced that he was going to address the matter by defining best practices to foster “a climate of mutual respect and civil discourse.”

While each of the incidents described above certainly contains “rude or unsociable speech or behavior,” university leaders who identify the problem as one of “incivility” rather than “intolerance” are making a critical mistake, for three reasons.

Incivility is defensible; intolerance is not. Anti-Zionist student groups whose members have been accused of incivility, along with the civil rights and legal organizations that support them, routinely argue that charges of “incivility” are blatant attempts to stifle political debate on campus and violate the First Amendment.

But if the anti-Zionist student groups’ behavior, which itself stifles political debate and violates the First Amendment rights of Jewish students, is correctly labeled as “intolerance,” no such argument can be made. Indeed, the suppression of views and beliefs that is a direct result of intolerant behavior is the archenemy of academic freedom and undermines the core mission of the university.

Incivility is cool; intolerance is not. After the chancellor of UC Irvine (UCI) responded to the SJP’s disruption of a Jewish student event by issuing a statement entitled “Respecting the Lines of Civility,” an op-ed was published in the student newspaper which championed “willfully uncivil” behavior as “the only rational response to calls for civility,” and urged students to “embody critique and ‘free speech’ through acts of willfulness and rebellion.”

Had the UCI Chancellor instead correctly identified the SJP’s violent disruption as “intolerance”—that is, a willful suppression of “critique and ‘free speech’” that differs from one’s own—no one would have dared to champion such repugnant behavior.

Incivility is victimless; intolerance is not. Rude and unsociable behavior may have a negative impact on the campus climate, but it does not inherently target particular individuals or groups for harm. Intolerance, on the other hand, necessarily involves the singling out of those with differing views, beliefs or behavior.

At many schools it is anti-Zionist activity, whose core goal is the suppression and delegitimization of Zionist expression and those presumed to support Israel, that is the primary source of intolerant behavior, making Jewish students one of the most victimized minorities on campus today.

For these reasons, when university administrators misidentify the harassment, intimidation, suppression of speech and ethnic discrimination of Jewish students as “incivility” rather than “intolerance,” they cannot help but fan the flames of anti-Jewish hostility on their campus.

The regents of the University of California clearly understood this when they unanimously approved a landmark statement entitled “Principles Against Intolerance,” which highlighted anti-semitism and anti-semitic anti-Zionism as forms of intolerance that “have no place at the University of California.” Using the term intolerance was no accident. It was a deliberate and important distinction.

It is high time for university leaders across the country to follow the UC regents’ lead. There must be zero tolerance for intolerance on our campuses.

Rossman Benjamin is a lecturer in Hebrew at the University of California and the director of AMCHA Initiative, a nonprofit that combats anti-Semitism on college campuses across the U.S.

On behalf of all of us at AMCHA Initiative, we wish you and your family… 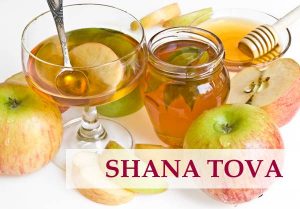