by Tammi Rossman-Benjamin and Ari Hier 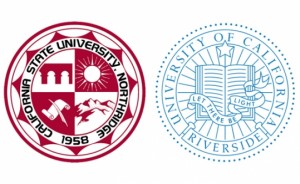 David Klein is a mathematics professor at California State University, Northridge. David Lloyd is a literature professor at the University of California, Riverside. Besides both being tenured professors at the two largest public university systems in the country, what do these two men have in common?

Klein and Lloyd are both vocal leaders in the campaign to boycott Israeli universities and scholars who have used their state university’s name and taxpayer-funded resources to promote a boycott of Israeli universities and scholars — a boycott that has not only been denounced by more than 200 university leaders, including CSU Chancellor Timothy White and UC President Janet Napolitano, but has also been deemed anti-Semitic by state and federal lawmakers and Jewish leaders throughout the world.

Professors Klein and Lloyd have something else in common: At both of their universities, top administrators have defended these two professors, claiming that their use of the university’s name and state resources to promote an anti-Semitic boycott of the Jewish state is protected by “academic freedom.”

Since 2009, Klein has hosted his “Boycott Israel Resource Page” on the CSU Northridge Web site, and linked it to his mathematics department homepage. Klein’s university-hosted Web page, whose sole purpose is to promote the academic, cultural and economic boycott of Israel, contains a litany of inflammatory and false statements, many of which meet the U.S. State Department’s definition of anti-Semitism, including the statement that “Israel is the most racist country in the world.” In addition, Klein’s university Web site includes graphic photographs of bloodied and mutilated babies, with the clear implication that Israeli soldiers deliberately maim and murder Palestinian children.

For more than two years, AMCHA Initiative, the Simon Wiesenthal Center and thousands of members and supporters of the Jewish community have urged CSU Northridge and CSU administrators to remove Klein’s page, on the grounds that a state university should not allow one of its employees to misuse the university’s name and taxpayer-funded resources for the purpose of advancing a personal vendetta against the Jewish state and its supporters. Shockingly, three successive Northridge presidents, including the current president, Diane Harrison, have defended this math professor’s right to post a “Boycott Israel” Web page on the university server, on the grounds that such behavior is protected by “academic freedom.”

Although Lloyd was only recently hired as a faculty member in the College of Humanities and Social Sciences (CHASS) at UC Riverside, he has lost no time in using his new faculty position to organize a lecture promoting the academic boycott of Israel for this quarter’s CHASS Annual Theme Event. Two weeks ago, students in eight different Riverside classes fulfilled a course requirement and received course credit for listening to the inflammatory propaganda and political screed of activist Omar Barghouti, founder of the Palestinian campaign for the academic boycott of Israel. Barghouti’s talk was also laced with classic anti-Semitic tropes, including accusations that Israeli soldiers hunt Palestinian children and murder them for sport, and that Zionist Jews control the U.S. Congress and the media.

Lloyd moderated Barghouti’s talk and announced during the Q-and-A period that he was proud he had invited Barghouti to speak, that he himself was a founding member of the U.S. Campaign for the Academic and Cultural Boycott of Israel and that many other professors at Riverside had also endorsed the academic boycott of Israel. (Indeed, the department chair and one-third of the faculty in the Ethnic Studies department, which co-sponsored the Barghouti event, have publicly endorsed the academic boycott of Israel).

When UC Riverside Chancellor Kim Wilcox was urged by two local rabbis and AMCHA Initiative to address the clearly inappropriate use of the university’s name and resources to promote an academic boycott of Israel, he refused, citing “academic freedom” as the reason.

While Northridge’s Klein and Riverside’s Lloyd may be the most egregious cases of faculty who use their state university positions and resources to promote an anti-Semitic boycott of Israel, they are far from the only faculty on California’s public university campuses to do so. Our organizations have also documented numerous instances of faculty who promote the boycott of Israel in their classrooms, and academic departments that sponsor and fund events promoting the boycott of Israel at San Francisco State University, CSU Fresno, Cal Poly San Luis Obispo, UCLA, UC Berkeley, UC San Diego, UC Santa Cruz and UC Davis. When CSU and UC administrators were notified of these incidents, in every case they approved the politically motivated and directed behavior of their faculty, claiming that it was protected by “academic freedom.”

But these administrators are simply mistaken. Academic freedom, the cornerstone of higher education in America, was always intended to uphold the university’s scholarly mission of pursuing knowledge free from the interference of government and other special interest groups. It was never intended to shield university professors who want to exploit their academic positions in order to advance their personal or political agendas.

Promoting an academic boycott of Israel is not a scholarly pursuit; it is pure political indoctrination. According to the American Association of University Professors, as well as policies on college and university campuses across the country, faculty who engage in the political or ideological indoctrination of their students are not only unprotected by academic freedom, they are in violation of its core principles. They may also be in violation of at least three California laws prohibiting the use of the name and resources of a state university for partisan purposes or for promoting a boycott. In addition, faculty who use their classrooms and conference halls as bully pulpits for promulgating their hatred of the Jewish state and its supporters cannot help but create a hostile and discriminatory environment for Jewish students on their campuses.

California taxpayers — including students, alumni, parents and donors of UC and CSU schools — are outraged that top administrators at California’s taxpayer-funded public universities refuse to exercise their due diligence in enforcing university policy and state law and ensuring the safety and well-being of all students on their campuses, including Jewish students.

We call on the California Attorney General and state legislators to investigate this matter.

Tammi Rossman-Benjamin is a lecturer in Hebrew at UC Santa Cruz and co-founder of AMCHA Initiative, an organization dedicated to monitoring and combatting campus anti-Semitism. Rabbi Aron Hier is director of campus outreach at the Simon Wiesenthal Center.