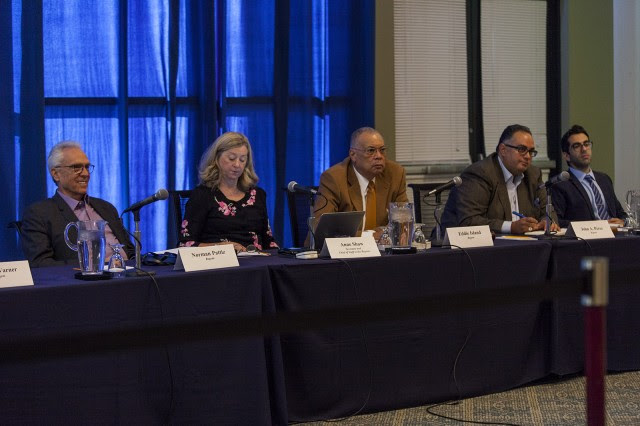 As part of the public forum held by the UC Regents Working Group on Intolerance, on Monday of this week, AMCHA Director Tammi Rossman-Benjamin presented the results of an on-line survey of UC Jewish students, which focused on their experiences of antisemitism, the impact of BDS on campus climate and whether campus administrators were sensitive to Jewish concerns. Of the 229 Jewish UC students who completed the survey:

In addition, students shared dozens of comments describing antisemitic incidents and the harmful impact of BDS on campus climate, including:

A summary of the AMCHA survey results can be found HERE

The Regents Working Group on Intolerance was formed in September after thousands of students, faculty, parents, alumni, rabbis, advocacy groups and concerned citizens drew attention to antisemitism on UC campuses, and the need for the adoption of the U.S. State Department definition as a tool for identifying and addressing the problem.

In addition to representatives from a number of AMCHA’s partner organizations, including Simon Wiesenthal Center, StandWithUs, Zionist Organization of America, Israeli-American Council, Hasbara Fellowships and Christians United for Israel, who spoke eloquently on the need to adopt the State Department definition of antisemitism, AMCHA commends Rabbi Aaron Lerner, executive director of Hillel at UCLA, and Rabbi Evan Goodman, executive director of Santa Barbara Hillel, for their compelling remarks speaking in favor of UC adopting a definition of antisemitism:

Additionally, we commend Daniel Gold, Vice President of Israel Education & Advocacy of the Jewish Federation of Greater Los Angeles, for his compelling remarks urging the UC Regents to address the serious problem of antisemitism on its campuses.

This was an important show of communal unity on behalf of the safety and well-being of Jewish students at the University of California!

Hillel International – 10/26/15 –
How do you solve a problem like anti-Semitism? You define it