In a systematic study released yesterday entitled “Report on Anti-Semitic Activity in 2015 at U.S. Colleges and Universities with the Largest Jewish Undergraduate Populations,” University of California schools did not fare well.

1) In a study of more than 100 schools most popular with Jewish students, 5 UC campuses were in the top 10% of schools with the most anti-Semitic activity, with 4 UC campuses rising to the top 5: 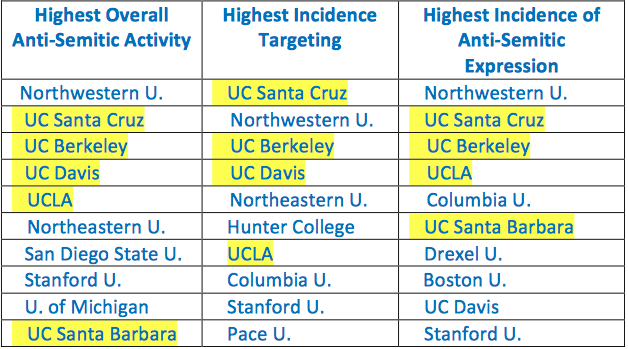 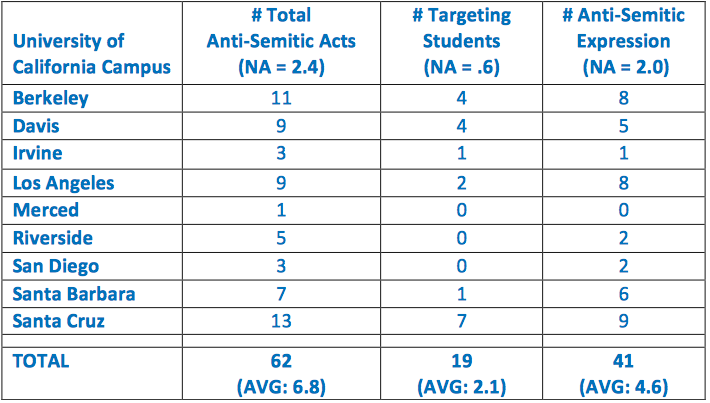 3) Strong correlation between anti-Zionism and anti-Semitism nationally and at UC:

4) Presence of SJP, faculty boycotters and BDS strong predictors of anti-Semitism nationally and at UC.

AMCHA Initiative conducted the study to understand more fully the nature and scope of anti-Semitism on U.S. campuses, as well as the factors influencing it. AMCHA investigated anti-Semitic activity over the last year on more than 100 public and private colleges and universities with the largest Jewish undergraduate populations. Unlike previous qualitative studies, which assessed levels of campus anti-Semitism by measuring student attitudes and subjective reports, this quantitative study assessed anti-Semitic activity by focusing only on verifiable incidents compiled from media accounts and eyewitness reports.

AMCHA Initiative is a non-profit organization dedicated to combating, monitoring and documenting anti-Semitism at institutions of higher education in America.
###