Reach Out to Legislators After Numerous Requests to University Administrators Ignored

Today AMCHA Initiative delivered a petition signed by more than 1,000 California residents, which included dozens of personal quotes of the signatories, to Senator Carol Liu and Assemblymember Das Williams, chairs of the Senate and Assembly education committees. The petition asks the legislators to help stop University of California (UC) and California State University (CSU) faculty from using taxpayer dollars for antisemitism.

“Thank you for your ongoing support of Jewish students and families in California. As the Chairs of the Senate and Assembly Education Committees, your continued leadership and commitment to ensuring the safety of Jewish students at California universities is greatly appreciated,” the Californians wrote in the petition.

“Unfortunately, our tax dollars are repeatedly being used to fund the promotion of a boycott of Israeli universities and scholars and other antisemitic propaganda by UC and CSU departments and faculty.”

“AMCHA Initiative, on our behalf, has repeatedly brought this issue to the attention of top CSU and UC administrators, as well as the CSU Board of Trustees and UC Board of Regents. However, these university leaders have turned a blind eye to our appeals for help. We are outraged that they continue to allow professors to manipulate students, abuse state funds and propagate hate on campus.”

In January, UC Davis, UCLA and UC Riverside used taxpayer dollars to sponsor events featuring Omar Barghouti, the founder and most vocal advocate of the Palestinian Campaign for the Academic and Cultural Boycott of Israel. At UC Riverside, students in eight courses were given credit for attending and listening to Barghouti’s anti-Israel and antisemetic propaganda. Invoking the classic blood libel, Barghouti accused Israeli soldiers of “hunting children,” saying that sharpshooter Israeli soldiers target Palestinian children and shoot to kill.

CSU mathematics professor David Klein has been using the university’s website to host his Boycott Israel Resource Page, which promotes the boycott of Israel and includes antisemitic material demonizing Israel and its supporters. Klein’s website includes untrue statements such as “Israel is the most racist state in the world” and “The result of Israeli state policies has been a 65 year program of ethnic cleansing…and mass murder.” Klein’s university webpage also includes graphic photographs of bloodied and mutilated babies, falsely implying that Israeli soldiers deliberately maim and murder Palestinian children. 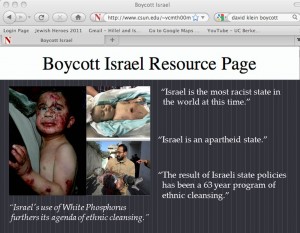 “As stakeholders of the two largest university systems in the country, we are firmly committed to the protection of free speech and academic freedom,” wrote the petition signers. “However, we are unwilling to allow our tax dollars to fund faculty and departments that abuse the privilege of ‘academic freedom’ in order to promote their own personal animosity towards the Jewish state and its supporters, and to advance antisemitic efforts to harm it.”

“We hope that, as Chairs of the Senate and Assembly Education Committees, you can ensure our tax dollars are no longer allocated to promote the personal political advocacy and activism of university employees, including the promotion of an antisemetic boycott of Israel.”

AMCHA Initiative called for California Attorney General Kamala K. Harris to investigate Klein for illegally using CSUN’s name and resources to promote an academic boycott of Israel. The group also asked the CSU Trustees to intervene. In addition, at the January UC Regents meeting, AMCHA Initiative demanded that the Regents investigate the UC schools for sponsoring the Barghouti events. Many of the petitioners have personally called the Regents and Trustees to voice their complaints. However, no action has been taken by either of these governing bodies.

More than 250 university leaders nationwide, several academic associations, and 134 members of Congress have condemned an academic boycott of Israel. In addition, bills have been introduced in five state legislatures – Illinois, Florida, Maryland, Pennsylvania and New York – to condemn or cut funds to any academic institution that engages in boycott activities. Also, U.S. Congressmen Peter Roskam and Dan Lipinski introduced a bipartisan bill, the Protect Academic Freedom Act, “to ensure that taxpayer dollars are not used to fund bigoted attacks against Israel that undermine the fundamental principles of academic freedom.”

To all of you who signed the petition, called, or emailed to voice your concern – thank you for your actions!

As always, thank you for your support.